What I Lived For

Oates’s dazzling plunge into the male psyche is at once a bravura technical performance and an indelible portrait of one man’s road to moral ruin. From its very first page, What I Lived For announces itself as a novel epic in vision and scale.

Throughout her distinguished career, Joyce Carol Oates has established a matchless reputation as a bold explorer of the American soul. In such novels as the National Book Award winning them, Because It Is Bitter, and Because It Is My Heart, and Black Water, she has limned our passions, our secrets, our deepest fears. Now, with What I Lived For, she has produced her masterpiece: a searing journey into the heart of a complex, troubled, and unforgettable man—and the women who made the mistake of loving him.

At forty-two, Jerome Corcoran—”Corky” to his friends and associates—is by all appearances a successful real estate developer and broker, a city councilman wih a promising future in local politics, a genuine ladies’ man, and all-around great guy. His big house, fifteen-hundred-dollar suits, and the ridiculously large tips he hands out all over town reassure him that he’s put plenty of distance between himself and the family history (which includes a murdered father and raving mad mother) he’d rather forget. Corky may think that his inauspicious beginnings on Irish Hill, one of Union City’s shabbier neighborhoods, are now far behind him, but over the course of Memorial Day Weekend 1992, that precious illusion, along with several others, will be completely shattered.

In the long list of Corky’s women, only one looms larger for him than his own appetites and self-interest: Thalia, his rebellious, radicalized step-daughter from his failed marriage. It is she who will become the agent of his undoing as a complex drama of corruption, blackmail, and political scandal climaxes in an act of explosive violence.

Oates’s dazzling plunge into the male psyche is at once a bravura technical performance and an indelible portrait of one man’s road to moral ruin. From its very first page, What I Lived For announces itself as a novel epic in vision and scale. It stands as Joyce Carol Oates’s most ambitious and most triumphant literary achievement.

God was deafening, out of the winter sky heavy with storm clouds above Lake Erie.

God was six staccato bursts of fire, and glass flying like crazy laughter, and the skidding of a car’s tires as a car accelerated rapidly going eastward on Schuyler.

God struck so swiftly, and without warning. No mercy. In the lightly falling powdery-glinting snow of Christmas Eve.

In fact it was just dusk of Christmas Eve: the brief day, overcast like ashes, was darkening early at 4:20 P.M.

Timothy Patrick Corcoran, hanging an evergreen wreath to the front door of the residence at 8 Schuyler Place, his back to the narrow street, caught the first of the bullets in the lower back, and the second shattered several vertebrae and ripped through his lungs, and the third went wild and the fourth struck the nape of his neck and lodged in the base of his skull and by this time pop-eyed in the astonishment of Death he was falling, yanking the heavy wreath with him to the fan-shaped stoop that began to glisten immediately with his blood. 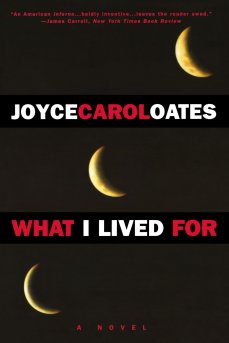 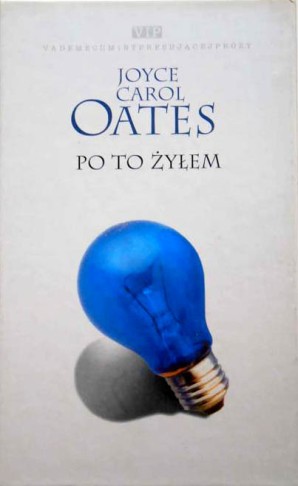 Q: Your two previous novels, Black Water and Foxfire, were much acclaimed for their bold, innovative characterizations of female protagonists. In What I Lived For you make a switch and get deep inside the mind of a man, Jerome “Corky” Corcoran. Was this difficult for you?

A: What was difficult about the composition of What I Lived For—which took place over a period of approximately three years—was the establishing of a narrative voice that reflects my protagonist’s voice, yet is not identical with his voice; and the meticulous interlocking of a plot that is both a “mystery” story and a highly tangled personal story of a man I consider representative of a certain kind of maleness. Corky Corcoran is not all men, by any means, but he is close to being an “average” man in many respects. I’d always felt, for years before I actually began the composition of the novel, that I knew Corky intimately—knew everything about him, outside and in; his complicated love life, and his even more complicated family life and business life; his ideals, his quirks, his secrets, his memories.

Q: How did you build this character?

A: My process as a writer is to “build” character simply by inhabiting him or her obsessively; during the course of writing a novel, I am immersed in my protagonists’ souls virtually all my waking life. (And perhaps much of my dream life as well.) I see my own world, which I move through as myself, through “fictitious” eyes, and note what my characters would think, do, in similar situations.

Q: Was What I Lived For easy or difficult to write?

A: Immensely difficult. It was started many years ago in the form of notes to myself and drafts, early chapters. Then I put that aside and worked on shorter novels. I did Black Water and Foxfire, and many short things in between, because it was such a difficult novel. Much of the time when I was working onWhat I Lived For I was actually very, very unhappy with myself, very impatient, very angry with myself. And I passed many months in a state of perpetual anger with myself, for not being able to do what my vision instructed. I had a definite vision of the novel. I knew emotionally what it was, but I’d sit down to work and I just couldn’t seem to get it. I work so much with dissatisfaction so much of the time, that to me, it characterizes my writing life.

Q: Is Corky Corcoran inspired by a particular person or type of person?

A: Corky Corcoran is very fleetingly—very slightly—inspired by an older relative of mine, who as family legend has it, was involved in something (business practices?) that resulted in his spending a night in jail. As it turns out, Corky does not spend a night in jail, though we witness him breaking laws now and then; and we can assume that his business practices are not entirely above-board. (Though hardly reprehensible by the standards of his, and our, contemporary business world.)

Q: As you wrote the novel, what were your own feelings about Corky?

A: Ultimately, I came to love Corky. He’s kind of an unusual character. He’s a very masculine man. Some would say a chauvanist, a male chauvanist pig, very macho, but I think that’s the way many men are, and I don’t judge them. Obviously, I’m not judging my characters; I’m so involved with them.

Q: What experiences of your own did you draw on to create Corky?

A: Corky’s fascination with science, especially with cosmology, is representative of the fascination, verging upon religious yearning, which many men feel for such “rational” explanations of the universe. Clearly, it’s a substitute religion, of a kind. I read literature on these subjects continuously, and a number of the titles Corky mentions are in fact part of my library. Like Corky, I read voraciously; but can’t comprehend the mathematics, of course. So like Corky—like most of us, I suppose—I’m left with a glimmering sense of the remarkable discoveries astrophysicists have made in recent years, without the capacity to truly understand them, still less explicate them to others.

Corky’s fascination, too, with the physical world, the world of his boyhood, in a neighborhood intersected by the Erie Barge Canal, is modeled in certain of its graphic details upon my own memories of growing up near Lockport, New York, where my grandmother lived, and where I attended junior high school. What I Lived For is very much a novel that celebrates its landscape and its historic moment.

Notes on Corky at Mass.

Posted on January 24, 2016 0 By Randy Souther Books Posted in Books Tagged #Joyce Carol Oates, novels, What I Lived For