Literary Structure: An Essay in Tweets

Assembling a story collection is very like structuring a novel: stories are “chapters” in a (subterranean? atmospheric? oblique) narrative. As the first sentence or paragraph in a novel is a […]

Joyce Carol Oates: By the Book

What book had the greatest impact on you? What book made you want to write? Lewis Carroll’s “Alice in Wonderland” and “Through the Looking-Glass,” which my grandmother gave me when […]

By Randy Souther Posted on September 9, 2012 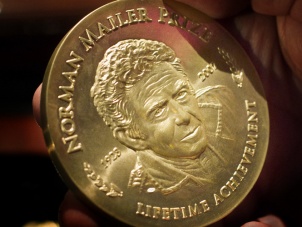 Joyce Carol Oates has won the 2012 Mailer Prize for Lifetime Achievement. The Mailer Prize, given by the Norman Mailer Center, is awarded to writers whose work over the years […]

My favorite prose on the subject [of walking] is Charles Dickens’s “Night Walks,” which he wrote some years after having suffered extreme insomnia that propelled him out into the London streets at night. Written with Dickens’s usual brilliance, this haunting essay seems to hint at more than its words reveal. He associates his terrible night restlessness with what he calls […]

Guest post by Tanya Tromble Joyce Carol Oates made an appearance in Paris on Saturday, July 4, for an interview and book signing session at the Virgin Megastore on the Champs Elysées.  The appearance was to promote the release of the French translation of her Journal.  She responded to questions from an interviewer and then from the audience for about […]

Art For My Sake

The Guardian asks Joyce Carol Oates and others whether writing for a living is a joy or a chore; JCO suggests don’t trust anybody’s answer: Recall that DH Lawrence warned us to trust the tale, not the teller – the teller of fictions is likely to be a liar. Darwinian evolutionary psychology suggests that none of us really knows what […]