I hate to lie I hate lies and liars but sometimes I have to lie, saying I ate some food I didn’t, saying I didn’t lose any more weight, that kind of lie I’m forced to tell to keep prying eyes away, to keep prying thoughts away, wanting to enter my head like buzzing wasps.

From the play I Stand Before You Naked: A Collage Play, published in Twelve Plays.

Lights up. A painfully thin but attractive girl of high school age, in a form-fitting costume, barefoot, stands facing the audience. She holds a large orange cupped in both hands like a talisman. Her manner is both uneasy and arrogant; a manic, even ecstatic certainty underlies her rambling speech.

GIRL (half shielding her face, raising elbows): You’re looking at me I wish you wouldn’t. Undressing me with your eyes, like on the bus after school…. Oh you may think—but say you’re a woman my mother’s age, or . . . no, some dirty-minded guy . . . (Confused) Like you think you got me trapped in a net with your eyes a net of eyes but—(laughs shrilly)—you don’t.

(She paces about, tossing and catching orange; smells the orange rubs it against her face.) 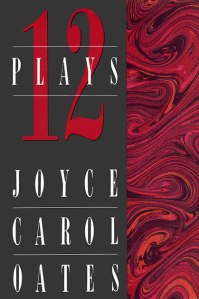 (Dreamy) This . . . in fifteen minutes time precisely I’m going to peel, and eat, eat some of it, one segment to begin with, just one I’ll eat it slow, slow slow I’ll peel it slow been waiting all day waiting for six, eight, ten hours I know how to wait, I am practiced in waiting in solitude you can’t know seeing me with just your eyes. I will peel it slow smelling that smell I love I love the rich ripe smell it’s a fiery smell kind of, it’s a smell goes right up your nostrils like burning wires to your brain, oh God my mouth is (wipes hurriedly at mouth) watering. That’s disgusting isn’t it, that’s disgusting I hate that. Oh my mouth is afire it scares me, like at, sometimes even at night, asleep I’ll wake up, I’m hungry I’ll wake up saying Momma, Momma!—it’s so alive, like it isn’t even me alive bleating like a ridiculous little baby for Momma’s milk but someone I don’t know. (Pause) Like between my legs sometimes. Like it’s afire. It’s damp in its own juices that I hate it’s aching throbbing afire but I don’t think about it, I hate it, I hate that, I’m a good girl I’m a straight-A honor student I hate that, don’t look at me with your eyes in judgment, you nasty ones. (Pause, then with the air of one imparting a secret) I don’t have cramps I don’t bleed down there anymore, that’s a sign of good intentions. God sees into the heart sees good intentions. I have mastered that. I have conquered that. But in swim class I was kind of . . . kind of weak . . . (GIRL drops to knees suddenly, as if faint-headed) . . . Miss Schrieber says, “Jill, is it your period? You can be excused you know if it’s your period” . . . so I lied I said yes, I said yes it was my . . . that. Or she’d send me to the school doctor and . . . (Pause; then with vehemence) I hate to lie I hate lies and liars but sometimes I have to lie, saying I ate some food I didn’t, saying I didn’t lose any more weight, that kind of lie I’m forced to tell to keep prying eyes away, to keep prying thoughts away, wanting to enter my head like buzzing wasps. Oh I know it’s you who own the world but inside here . . . (GIRL draws a circle on the floor with chalk, herself in the center) . . . here it’s me it’s mine. You can’t enter. (Defiantly, childlike) I didn’t tell Miss Schrieber, I haven’t told Momma, I have not had a, oh I hate that, that word I hate, “period,” I hate that word “menstruation.” I have not had any, any of that, that kind of . . . blood . . . in eleven months. I’m counting on my calendar marking secret signs Momma can’t decipher should she spy on me. I can step out of this—(GIRL steps out of chalk circle)—but none of you can step in.

(She circles the chalk circle, provocatively, tossing and catching orange.)

This . . . oh it’s almost time. I will peel it I will smell it I will bite into it . . . one segment at a time . . . my teeth aching, my mouth . . . alive afire . . . tears in my eyes . . . am I trembling? (Regards hands) Am I shaking? I’ll hide away in a toilet stall to eat my orange, oh I don’t want anybody watching, I hate that, my girl friends even I hate that, there’s Cathy she hides away too but we don’t talk about it, just looking at each other we know, the Kingdom of God is within is what we know, a torch inside us, God’s hunger, burning throbbing aching, the saints knew but they are all dead mostly. Except . . . Mother Teresa. (Pause) But we’re not Catholic. We’re not anything. (Pause) It used to be, I’d stick my finger down my throat—(mimes this, gagging)—now I don’t need to, I’m in control. That first time it just came to me like God allowed me to know it was Thanksgiving it was nine of us at the table and Momma and Aunt Tess fussing over the food, and this, this gravy, this turkey gravy in the gravy bowl I saw how it was slick with fat I mean oily globules of fat—oh so disgusting so gross—Momma saying, “Take some gravy, take more mashed potatoes take more dressing more butter more turkey more cranberry sauce more gravy” . . . I locked myself in the bathroom I knew what to do . . . (Mimes the act of vomiting; then wipes her face; relieved, refreshed, radiant) I felt so good after I knew I was saved. (Pause)

So I went from 128 pounds to 120 pounds to 115 pounds to 109 . . . Then it got harder, for a while . . . seems like certain kinds of flab—(roughly pinches waist, hips; presses her small breasts flat)—are stubborn to melt away. Momma started asking what’s going on? was I on a diet or something? was I trying to starve myself what’s going on? One day Momma barged in my room fouling the air with her cigarette, took hold of this old ratty sweater I was wearing, my favorite old sweater I wear around the house, Momma yanked it tight seeing how thin I was she got scared then I saw it in her eyes, saying “Oh Jill oh hon oh my God what’s wrong”— and I—(backs away, speaking rapidly)—I said “Momma don’t touch don’t touch leave me alone don’t touch!”

(GIRL mimes fending off someone; repositions herself inside the chalk circle, panting and trembling.)

Now I weigh 93 pounds . . . this morning I did . . . but I had some Diet Coke, four cans of Diet Coke, so I’m . . . heavier. Yesterday I had a 7-Grain Datebar . . . divided it into quarters ’cause it weighs four ounces I spread out eating it over four hours in my room in the dark after they’d all gone to bed I’m happiest then. At school I can be happy too in a different way inside here (indicates circle) but it’s harder. I divide up the Diet Coke, the diet chocolate-cream, coffee if it doesn’t make me too spaced out, what I hate’s running to the restroom a dozen times a day my stomach bloating I hate that you can see it now can’t you! can’t you! (Strikes fist against belly) Like I’m, you know, like I’m, I’m pregnant, going to have a, a baby but oh no I’m not oh nonever. (Trembling; on the verge of mania) I’m so happy you can’t know, inside me, there’s God inside me you can’t trap me with your eyes, no nor Momma either with her threats and tears and coercion, no other word but COERCION but she can’t get me can’t touch me, they say—the doctor she made me go to, the therapist—that woman Ph. D. who came to talk to us at assembly—saying it’s a medical problem an illness trying to scare us “irreversible liver damage” but it isn’t, it isn’t physical at all, it’s here, it’s God inside me, it’s mine. Like you out there—you’re all babbling in some foreign language. (Pause; then with ecstatic certainty) My days my nights I love how they are divided like this orange divided into segments I pick apart with my fingers, sink my teeth into slow like on the far side of my hunger those faces, voices—you—sure I see you, and I hear you, I talk with you I smile at you but . . . I don’t care about you. I don’t. Not a one of you. I am always thinking of . . . this. (Holds orange high above her head) Always I am thinking of . . . dreaming of . . . oh it’s like fire! it hurts! it’s wild in a frenzy like fire the inside of my mouth alive with hunger with wanting to bite to chew to eat to EAT EAT EAT like a frenzy alive like scurrying ants!—the hunger and the food COLLIDE . . . (Wincing) It’s pain but it’s a good pain. (Pause) Sometimes, I’m not weak or sick or, I know I must conserve my strength, I’ll, like, crawl up a stairs . . . (on hands and knees) . . . if nobody’s around . . . (Pause; flaring up angrily) “I don’t want to be touched” I said, “I don’t love you or anybody love hurts my skin hurts don’t touch me” I said “STAY CLEAR.” (Pause) Now it s time, it s time it’s that time now I’m safe nobody can see I’m locked in this toilet stall it’s the middle of the hour nobody will barge in nobody can trap me with their eyes I’m safe I can’t be touched I . . . (Orange rolls out of GIRL’S fingers, out of the chalk circle, out of reach: she strains to get it but cannot.)

The GIRL is frozen in posture, trying to reach orange. Slow dimming of lights.

Image: “a slice of light” by Melanie Cook