The poems in this final volume of Sylvia Plath’s work were all written during the last year of her life, and are therefore products of the same anguished, meticulous imagination that created the famous Ariel 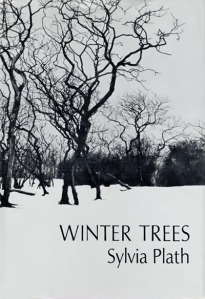 The poems in this final volume of Sylvia Plath’s work were all written during the last year of her life, and are therefore products of the same anguished, meticulous imagination that created the famous Ariel. Though in general this particular collection is not so striking as Ariel, a number of the poems and the long radio play, Three Women, are unforgettable for their eerie fusion of power and helplessness.

The title poem tells us of the ‘blue dissolve’ of trees at dawn; Plath, observing the ‘effortless’ seeding of nature, envies the otherworldliness of the winter trees that know ‘neither abortions nor bitchery.’ The poet’s voice is tentative, uncertain. The dissolving of the ego is a characteristic of Plath’s work, as if the poet did not believe sufficiently in her own identity, but imagined that the exterior world—whether of men, other women, animals, or inanimate nature—possessed some strange power to annihilate her.

‘Mystic’ is a poem of ‘questions without answer’—a series of speculations on the probable horror of any confrontation with the divine. For Plath, a mystic communion with anything outside herself seems a nightmare: ‘Once one has seen God, what is the remedy?’ she asks. The poems build up through an accumulation of sharp, deadly images, to a statement of tension, rather than a resolution of tension; they seek out enemies, define them, dissect them, but ultimately acquiesce even when the surrender involves an annihilation of the self (indeed, the word annihilation is used often). Thus Sylvia Plath’s poems can be said to be the most lyric, precise, and heartbreaking articulation of a totally passive femininity—pathologically suppressed, except in the violence of the poems themselves.

We know from Ted Hughes’ remarks that many of these poems are not completed, and it is evident that the bulk of Winter Trees does not constitute so finished a work as Ariel or The Colossus. Nevertheless, the volume is fascinating in its preoccupation with formlessness, with dissolving, with a kind of premature posthumous disappearance of the poet’s personality. Outstanding is the verse play, Three Women, which takes place in a maternity ward and explores three differing responses to the experience of childbirth. ‘There is no miracle more cruel than this,’ one of the women cries. Sylvia Plath’s talent was for the depiction of extreme, exhausted states of mind, in which the physical aspects of life—or, in some cases, the terror of the physical—so outweigh the intellect’s capacity for survival that the poet’s identity cannot be sustained. Though critics have begun to react against the initial awe with which Sylvia Plath’s posthumous poems were greeted, it seems incontestable to me that her poems, line by line, image by image, are brilliant. Of her emotional and intellectual maturity it is perhaps best to say little, except to point out that poetic genius has rarely depended upon maturity; it is enough to acknowledge the existential authority of these poems, which, ultimately, go beyond criticism.