In the world of A Bloodsmoor Romance, time machines run rampant, Transcendentalism gives way to the Spirit World, and decorum and etiquette fall to the exigencies of the passions. Amid yards of lace, sweet songs, and hope chests filled with twelve dozen of everything, the Zinn daughters—and America—are thrust headlong into the modern age. This is the tale our classics never dared reveal, the other side of Little Women as only Joyce Carol Oates can tell it.

Joyce Carol Oates’s Bellefleur was hailed by critics as “a masterpiece” and “a gothic of major proportions.” Now, here is her version of the nineteenth-century romance. Steeped in Victoriana and told by a demure, virgin narrator, A Bloodsmoor Romance is an ingenious blend of myth and history, humor and profundity, the sublime and the grotesque. It is a rich account of one family’s “ignominious” history and provides us with a singular vision of America’s formative years.

It all begins when Miss Deirdre Zinn, adopted daughter of inventor John Quincy Zinn, is abducted in broad daylight by “an outlaw balloon of sinister black silken hue, manned by an unidentified pilot.” Until this fateful episode, the Zinns were not unlike other families with five marriageable daughters who settled in the Bloodsmoor Valley of Pennsylvania. But as young Deirdre sails off to infamy, the Zinn family has already begun a process of transformation that is as multifarious as it is extreme.

Constance Philippa is next to make her escape from the cloistered world of Bloodsmoor: she behaves scandalously on her wedding night, never to be seen again in quite the same shapely guise. Malvinia, seduced from her home by the lure of the stage, attains the heights of worldly acclaim—and the amorous attentions of a dandy named Mark Twain. Octavia, the least rebellious of the sisters, finds her “reward” close to home; while Samantha, the “brainy” one, devotes herself to her father’s great work—with unexpected consequences.

In the world of A Bloodsmoor Romance, time machines run rampant, Transcendentalism gives way to the Spirit World, and decorum and etiquette fall to the exigencies of the passions. Amid yards of lace, sweet songs, and hope chests filled with twelve dozen of everything, the Zinn daughters—and America—are thrust headlong into the modern age. This is the tale our classics never dared reveal, the other side of Little Women as only Joyce Carol Oates can tell it. 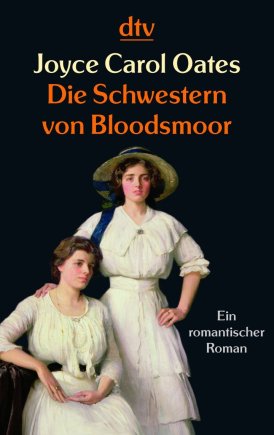 “. . . Nevertheless, Deirdre,” the blushing gentleman said, with an abjuring gesture, and an uneasy smile playing about his manly lips, “nevertheless I must speak bluntly, tho’ I risk your anger, or, excuse me!—the anger of your spirits: I must warn you against sacrificing yourself to a life of Spiritualist ‘service’—answering always to the demands of others, whether deceased spirits, or living clients. Ah, to drain away your life’s blood, in such employ!—in ghoulish darkened rooms, amidst the perpetually mourning! My dear girl, it is a most piteous fate!”

. . . when at last she spoke, her voice was not greatly changed, and her manner retained its semblance of glacial calm. “And shall I inquire, Dr. Stoughton, what a fate might be, that, in your professional assessment, is not piteous?”

Dr. Stoughton’s stolid cheeks burnt yet a richer crimson, as he spake, in a voce somewhat quavering, yet withal assertive: “The joyous fulfillment of your sex: the sacred duties of beloved wife, and helpmeet, and mother. In opposition to the vulgar and mercantile hurly-burly of the great world, the idyllic pleasures of the domestic hearth—the which, I firmly believe, make of one small room an everywhere, indeed; and provide us with that small measure of bliss, which is, if we are greatly fortunate, and deserving, Our Lord’s promise to us, of the Heaven to come.”

. . . “I am deeply grateful for your suggestion, Dr. Stoughton, uttered out of that special reservoir of wisdom that is yours, both as a consequence of your profession in life, and your maleness: but you will forgive me, if I demur, in that I much prefer intercourse with the Spirits.”

A Bloodsmoor Romance was the second to be published in the “Gothic Series.”

“The opportunity might not be granted me again, I thought, to create a highly complex structure in which individual novels (themselves complex in design, made up of ‘books’) functioned as chapters or units in an immense design: America as viewed through the prismatic lens of its most popular genres.” —Joyce Carol Oates, 1985

Oh the Earth was made for lovers, for damsel, and hopeless swain,
For sighing, and gentle whispering, and unity made of twain.
All things do go a-courting, in earth, or sea, or air,
God hath made nothing single but thee in His world so fair!
The bride, and then the bridegroom, the two, and then the one,
Adam, and Eve, his consort, the moon, and then the sun;
The life doth prove the precept, who obey shall happy be,
Who will not serve the sovereign, be hanged on fatal tree.
The high do seek the lowly, the great do seek the small,
None cannot find who seeketh, on this terrestrial ball;
The bee doth court the flower, the flower his suit receives,
And they make merry wedding, whose guests are hundred leaves;
The wind doth woo the branches, the branches they are won,
And the father fond demandeth the maiden for his son. . . .
The worm doth woo the mortal, death claims a living bride,
Night unto day is married, morn unto eventide;
Earth is a merry damsel, and heaven a knight so true,
And Earth is quite coquettish, and beseemeth in vain to sue. . . .
There’s Sarah, and Eliza, and Emeline so fair,
And Harriet, and Susan, and she with curling hair!
Thine eyes are sadly blinded, but yet thou mayest see
Six true, and comely maidens sitting upon the tree;
Approach that tree with caution, then up it boldly climb,
And seize the one thou lovest, nor care for space, or time!
Then bear her to the greenwood, and build for her a bower,
And give her what she asketh, jewel or bird, or flower—
And bring the fife, and trumpet, and beat upon the drum—
And bid the world Goodmorrow, and go to glory home!

From a recorded interview with Tom Vitale (A Moveable Feast #9):

“I think that writers and artists do all sorts of imaginative things, partly as a challenge, and partly because it seems to be the way the unconscious is dictating: that maybe it’s time to investigate what Romance is. Why cannot a narrative have a genuinely happy ending, or even five happy endings? We know in life that people do get married, and sometimes it works out well. People do fall in love.

There has been for many decades now a kind of obverse prejudice that a realistic novel ends unhappily, that marriage is disastrous, and maybe that society bears it out. But I think there’s also a very definite dimension to the Romantic sensibility—that Romance is a part of the human psyche—and all writers are in fact Romantics, because the very act of writing is a Romantic activity.

I know I really am very Romantic, and idealistic, and often sentimental. So when attacking the genre of a Romance specifically and trying to revitalize some of the old traits of plot and characterization, I think I was really giving way to a sense that maybe today we do need to revitalize Romance.

At the same time of course there’s a great deal that is playful about it.”

Of the divers books consulted in the preparation of this definitive chronicle, some four stand out, as deserving of especial note; these being, The Ladies’ Wreath, A Magazine Devoted to Literature, Industry, and Religion, Mrs. S. T. Martyn, ed. (New York, 1847); The Wedding-Day Book, arranged by Katharine Lee Bates (Boston, 1882); The Sociology of Invention, S. C. Gilfillan (Chicago, 1935); and Psychical Research, Science, and Religion, Stanley De Brath (London, 1925). Frequent quotations in this volume, particularly of verse, are liberally drawn from the excellent books assembled by Mrs. Martyn and Miss Bates, to whose literary labors, and bounties, I am very much in debt.

Image: “Last One?” by Matt Gibson