MARRIAGES AND INFIDELITIES is Joyce Carol Oates’s fourth volume of short stories. In this collection, Miss Oates, who has been called “the best young novelist in the United States today,”* and whose most recent book of short stories, The Wheel of Love, was acclaimed as “quite simply one of the finest collections of short fiction ever written by an American,”** explores the complex, mysterious relationship between love and its frequent betrayal.

Miss Oates is one of the most honored authors in the world of American letters, and many of these stories have themselves won awards. Here she writes with the compelling, dynamic, searing style that distinguishes all her work. These are stories that will fascinate and stimulate—stories that must be read. 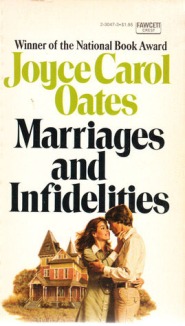 On the Marriage of a Virgin

Waking along in a multitude of loves when morning’s light
Surprised in the opening of her nightlong eyes
His golden yesterday asleep upon the iris
And this day’s sun leapt up the sky out of her thighs
Was miraculous virginity old as loaves and fishes,
Though the moment of a miracle is unending lightning
And the shipyards of Galilee’s footprints hide a navy of doves.

No longer will the vibrartions of the sun desire on
Her deepsea pillow where once she married alone,
Her heart all ears and eyes, lips catching the avalanche
Of the golden ghost who ringed with his streams her mercury bone,
Who under the lids of her windows hoisted his golden luggage,
For a man sleeps where fire leapt down and she learns through his arm
That other sun, the jealous coursing of the unrivalled blood.

In Frankfurt I performed in a powdered wig, I wore a sword fashioned of the most delicately engraved silver, and the boy Goethe stared at me and thought: Another Immortal!

But afterward my valet took away the sword so that I wouldn’t hurt myself; he took away the other gifts also, laying them aside with care, tenderly, and drew me away from the mirror I was gazing into, to kneel beside him as he offered thanks to God for the success of the evening.

Help us into immortality.

You wince at my happy endings, you wince as you realize that this, too, has a happy ending, rounds off to the usual sprightly ending that is a habit of mine. But you get into such habits as a child—the habit of satisfying people, which then becomes satisfying and is its own ending.

Am I loved, am I saved . . . ? is a song people don’t want to hear. Even you don’t want to hear it. Well, maybe at a distance: across centuries. You listen for it in my music, sly and clever as my music is, so powerful it can’t be measured; like ordinary sunlight. But you wouldn’t want to hear it close up, face to face, a face mirror-close to yours, would you? What answer could you give?

So the happy ending is really for you, for your guardedness. And if you are anaesthetized. . . . After all, that is a kind of rehearsal.