Skip to content
Cardiff, by the Sea: Four Novellas of Suspense
Books

Cardiff, by the Sea: Four Novellas of Suspense

Joyce Carol Oates, the “grand mistress of ghoulishness” (Publishers Weekly), showcases her mastery in four deeply disturbing novellas that will leave the reader both quaking and pining for more.

From one of the most important contemporary American writers, Cardiff, by the Sea is a bold, haunting collection of four previously unpublished [sic] novellas.

In the title novella, a romantic-minded young art historian  is led to (re)discover a terrifying trauma after inheriting a property in faraway Cardiff, Maine, from relatives of whom—she is sure—she has never heard of. Mia, the protagonist of “Miao Dao,” is a lonely pubescent girl who befriends a most unusual feral cat that becomes her protector against the increasingly aggressive boys and men in her life.

A brilliant but shy college sophomore realizes that she is pregnant in “Phantomwise: 1972.” Distraught, she allows a distinguished visiting professor to take her under his wing, though it quickly becomes evident that he is interested in more than an academic mentorship. Lastly, “The Surviving Child” is Stefan, who was spared when his mother, a famous poet, killed his sister and herself. Stefan’s father remarries, but his young wife is haunted by the dead poet’s voice dancing in the wind, an inexplicably befouled well, and a compulsive draw to the same garage that took two lives. 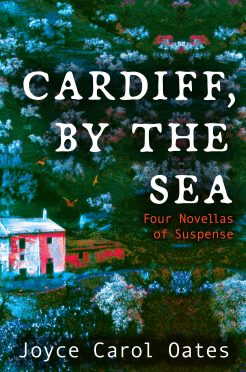 The four novellas in this spellbinding collection from Oates carefully tread the boundary between psychological and supernatural expressions of the macabre….This superb outing is sure to captivate.

Using her remarkable, literary voice to investigate the psychological experiences of victims, Oates requires that we willingly suspend our disbelief and reject realism as a means to identify societal truths.

Family secrets bloom into nightmares in these skillful, chilling stories.

In each tale, these women walk a shaky tightrope, teetering between self-deception and self-actualization, between doubt and certitude, as they encounter threats real and imagined…. Careful reading is advised, for Oates’ menacing novellas can turn on a single sentence buried deep in the narrative, making the reader, much like the characters, distrust what they thought to be true.