A Novel by Joyce Carol Oates A dystopian novel of one young woman’s resistance against the constraints of an oppressive society, from the inventive imagination of Joyce Carol Oates. “Time […]

A Novel by Joyce Carol Oates

A dystopian novel of one young woman’s resistance against the constraints of an oppressive society, from the inventive imagination of Joyce Carol Oates.

“Time travel” — and its hazards—are made literal in this astonishing new novel in which a recklessly idealistic girl dares to test the perimeters of her tightly controlled (future) world and is punished by being sent back in time to a region of North America — “Wainscotia, Wisconsin”—that existed eighty years before.  Cast adrift in time in this idyllic Midwestern town she is set upon a course of “rehabilitation”—but cannot resist falling in love with a fellow exile and questioning the constrains of the Wainscotia world with results that are both devastating and liberating.

Arresting and visionary, Hazards of Time Travel  is both a novel of harrowing discovery and an exquisitely wrought love story that may be Joyce Carol Oates’s most unexpected novel so far.

A self is simply a device for representing a functionally unified system of responses.
—B. F. Skinner, Science and Human Behavior 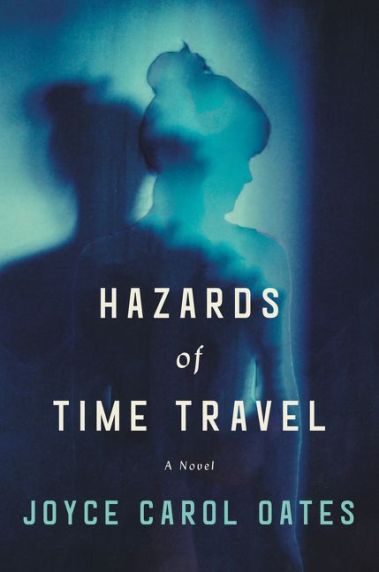 It was a famous behaviorist experiment of 1920 conducted by John Watson.

The eleven-month infant, Little Albert, had not been frightened of any animals until a gentle white rat was placed in his lap and a sudden loud noise of two steel bars struck together behind his head, several times in succession. Soon then, Little Albert began to cry at the very sight of the rat, as of a dog, or even a fur coat, and to exhibit symptoms of terror preceding the clanging of the steel bars.

We were shown a film in the lecture hall. Old, grainy, jumpy, but unmistakable—the infant was convulsed with terror as the steel bars were struck behind his head, and soon he learned to hate and fear the gentle white rat he’d previously seemed to like.

One day I would ask Wolfman—Why hadn’t the experimenter de-conditioned the infant, after the experiments? Hadn’t anyone thought of this?

Wolfman said he didn’t think so. Didn’t think that Watson or anyone else had thought of “de-conditioning” at the time.

I asked Wolfman if Little Albert had grown up to be frightened of animals and fur coats and Wolfman said, No. The poor kid hadn’t grown up at all, he’d died at age six.

Confused by the surreal elements of her mid-20th-century prison and terrified that she may never return home, Adriane begins to see herself as a pigeon in a Skinner box being conditioned to react in acceptable ways. Meanwhile, the story’s unpredictable shocks may reduce readers to a state of learned helplessness. Nothing — including a happy ending — is as it seems in this accelerating swirl of political and academic satire, science fiction and romantic melodrama. At 80, after more than 40 novels, Oates is still casting some awfully dark magic.

Oates probes the diabolical, shape-shifting nature of authoritarianism and the timeless valor of dissent. While in this clever, brain-twisting, Poe-like fable she looks to the past and the future to dramatize the vulnerability of the psyche, the fragility of freedom, and the catastrophic consequences of repressing intelligence, independence, and creativity, what Oates illuminates is the present.

. . . in a time when American politics seem circular (if not backward), when we seem to be revisiting the struggles from the era of Civil Rights and Women’s Liberation, Oates’s novel about how relationships with the past impact the present is indeed timely. Although there are areas I would have liked to see Oates dig into to heighten her critique, overall, this is an engaging book with an author you can trust to take you on a fully realized journey to think about yesterday, today, and tomorrow.

Are Adriane’s choices and decisions ultimately the result of her environment and the government she lives under? How much agency does she have to enact change in her surroundings and determine her own future? These questions pile on top of each other over the course of the story and build into a fever of paranoia and uncertainty so that the novel’s conclusion (which would be considered positive in any other circumstance) feels incredibly sinister and horrific.

. . . Oates creates a world in which cherished American freedoms have disappeared and technology has risen to include time travel. And in the end, the will to survive outweighs the search for truth.

Oates weaves a feeling of constant menace and paranoia throughout as Adriane struggles to remember her old life and adjust to her new one. The conclusion is surprising and ambiguous, leaving readers to question their own perception of events, making for a memorable novel.

Oates needn’t mention Donald Trump to make the target of this dark allegory clear. The United States has become a repressive regime that’s run by oligarchs, ranks its citizenry by skin tone, and “vaporizes” dissenters.  . . . flirts with melodrama. But forgivably so: Are we not living in emotionally demanding times?

Presumably Wainscotia’s fondness for B. F. Skinner is intended by Oates as a proxy for mid-century regimentation, but Adriane’s reaction seems excessive. For all its many flaws, behaviorism suggests some useful, if uncomfortable, truths about human nature, truths that Adriane may or may not recognize, but would, in any case, be unwilling—and this may be what Oates is driving at—to accept (despite or even because of the ability of the nas regime to condition those who live under it).