“Certainly this paradigm—the woman floundering about in a world of male force—returns to haunt nearly every story in the book, producing an intensity that we haven’t felt in the American art story—and I’m serious about this although it might seem extravagant to say—since the work of Poe”

A gripping and moving new collection of stories that reimagines the meaning of loss—through often unexpected and violent means.

Joyce Carol Oates is not only one of our most important novelists and literary critics, she is also an unparalleled master of the short story. Sourland—sixteen previously uncollected stories that explore how the power of violence, loss, and grief shape both the psyche and the soul—shows us an author working at the height of her powers.

With lapidary precision and an unflinching eye, Oates maps the surprising contours of “ordinary” life. From a desperate man who dons a jack-o’-lantern head as a prelude to a most curious sort of courtship, to a “story of a stabbing” many times recounted in the life of a lonely girl; from a beguiling young woman librarian whose amputee state attracts a married man and father, to a girl hopelessly in love with her renegade, incarcerated cousin; from a professor’s wife who finds herself tragically isolated at a party in her own house, to the concluding title story of an unexpectedly redemptive love rooted in radical aloneness and isolation, each story in Sourland resonates beautifully with Oates’s trademark fascination for the unpredictable amid the prosaic—the commingling of sexual love and violence, the tumult of family life—and shines with her prediliction for dark humor and her gift for voice. 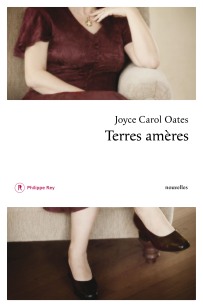 In late March, there’d been a sleet storm throughout north-central New Jersey. Her husband had died several days before. There was no connection, she knew. But since that time she’d begun to notice at twilight a curious glistening to the air. Often, she found herself in the doorway of her house, or outside, not remembering how she’d got there. For long minutes, she would stare as the colors faded and a glassy light emerged from the sky and from the Scotch pines surrounding the house. It did not seem to her a natural light, and in weak moments she thought, This is the crossing-over time. She watched, not knowing what she might be seeing. She felt aroused, vigilant. She felt apprehension. She wondered if the strange glistening to the air had always been there but in her previous, protected life she hadn’t noticed it.

This October evening, before the sun had entirely set, a pair of headlights turned in to the driveway, some distance away by the road. She was startled into alertness—at first not sure where she was. Then she remembered: Anton Kruppev was dropping by to see her.

Dropping by, he’d said. Or maybe she’d said, Why don’t you drop by?

She couldn’t make out his face. He was driving a pickup truck with white lettering on one side. He climbed down from the driver’s seat in the high cab and lurched toward her on the shadowy path—a tall male scarecrow figure with a misshapen Halloween pumpkin for a head.

What a shock! Hadley backed away, not sure what she was seeing. A grinning pumpkin head on a man’s shoulders, its leering cutout eyes not lit from within, like a jack-o’-lantern, but dark, glassy.

“Oates grows more insightful, virtuosic, and audacious in her confrontations with fear, pain, and death. Her latest stories of sexual mayhem, family crisis, and shattered identity are barely contained beasts of narration, snorting, pawing, and pulling against the confines of the page….This is a trenchant book of “cruel fairy tales” in which people are severely tested, profoundly punished, and tragically transformed.”

“Certainly this paradigm—the woman floundering about in a world of male force—returns to haunt nearly every story in the book, producing an intensity that we haven’t felt in the American art story—and I’m serious about this although it might seem extravagant to say—since the work of Poe….Making sense of life in a cataclysmic inner and outer landscape has been Joyce Carol Oates’ obsession for five decades. This evocative new collection shows just how much sense she can make of it now.”

“This collection could be used as a master class in the art of pure, suspenseful storytelling. … Oates is a dangerous writer in the best sense of the word, one who takes risks almost obsessively, with energy and relish. For a writer in her early 70s, she continues to be wonderfully, unnervingly anarchic, experimental, angry. As if her aim were not to satisfy or entertain — though she always does both — but to do the vandalistic prose equivalent of spray-painting or setting fire to bins in public parks. Never has she done this more relentlessly — and exhaustingly — than in this dazzling collection.”

“…a dark and daring literary achievement.”