A longtime aficionado of the sweet science, Oates first became interested in boxing as a child, as an offshoot of her father’s interest.

Some of our greatest writers—Jack London, Ernest Hemingway, Norman Mailer, to name a few—have written some of their finest prose on the rich and endlessly fascinating subject of boxing. Now, this distinguished company is joined by one of our most popular and respected novelists, Joyce Carol Oates.

A longtime aficionado of the sweet science, Oates first became interested in boxing as a child, as an offshoot of her father’s interest. (He took her to Golden Gloves matches, subscribed to The Ring magazine, etc.) She has now focused her thoughts and feelings about boxing in an eloquent, erudite, and illuminating essay which examines boxing from every conceivable aspect: boxing as metaphor, spectacle, dance; the history, lore, and allure of boxing; the question of whether boxing should be banned; boxing in literature and film; women and boxing.

ON BOXING is also, in part, a feminist document: an attempt to “understand” the mystique of masculinity by looking at this most quintessentially masculine of contact sports; an examination, from the outside, of the male-dominated culture of our time. “In the brightly lit ring, man is in extremis,” writes Oates, “performing an atavistic rite or agon for the mysterious solace of those who can participate only vicariously in such drama: the drama of life in the flesh. Boxing has become America’s tragic theater.”

This exquisite study from the pen of an extraordinary writer ranges from the metaphysical musings on Time and Death to small, informative details like this one: “A well-aimed punch with a heavyweight’s full weight behind it can have the equivalent force of ten thousand pounds.”

With the text complemented by John Ranard’s poetic and evocative boxing photographs, ON BOXING makes for a unique and stunning reading experience.

Love commingled with hate is more powerful than love. Or hate. 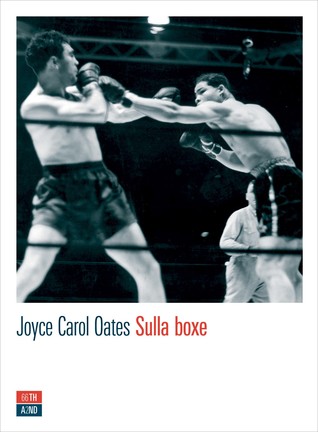 To the untrained eye most boxing matches appear not merely savage but mad. As the eye becomes trained, however, the spectator begins to see the complex patterns that underlie the “madness”; what seems to be merely confusing action is understood to be coherent and intelligent, frequently inspired. Even the spectator who dislikes violence in principle can come to admire highly skillful boxing—to admire it beyond all “sane” proportions. A brilliant boxing match, quicksilver in its motions, transpiring far more rapidly than the mind can absorb, can have the power that Emily Dickinson attributed to great poetry: you know it’s great when it takes the top of your head off. (The physical imagery Dickinson employs is peculiarly apt in this context.)

This early impression—that boxing is “mad,” or mimics the actions of madness—seems to me no less valid, however, for being, by degrees, substantially modified. It is never erased, never entirely forgotten or overcome; it simply sinks beneath the threshold of consciousness, as the most terrifying and heartrending of our lives’ experiences sink beneath the level of consciousness by way of familiarity or deliberate suppression. So one knows, but does not (consciously) know, certain intransigent facts about the human condition. One does not (consciously) know, but one knows. All boxing fans, however accustomed to the sport, however many decades have been invested in their obsession, know that boxing is sheerly madness, for all its occasional beauty. That knowledge is our common bond and sometimes—dare it be uttered?—our common shame.

To watch boxing closely, and seriously, is to risk moments of what might be called animal panic—a sense not only that something very ugly is happening but that, by watching it, one is an accomplice. This awareness, or revelation, or weakness, or hairline split in one’s cuticle of a self can come at any instant, unanticipated and unbidden; though of course it tends to sweep over the viewer when he is watching a really violent match, I feel it as vertigo—breathlessness—a repugnance beyond language: a sheerly physical loathing. That it is also, or even primarily, self-loathing goes without saying.

For boxing really isn’t metaphor, it is the thing in itself. And my predilection for watching matches on tape, when the outcomes are known, doesn’t alter the fact that, as the matches occurred, they occurred in the present tense, and for one time only. The rest is subterfuge—the intellectual’s uneasy “control” of his material.

Impossible to see the old, early fights of Dempsey’s and not to feel this frission of dread, despite the poor quality of the films, the somewhat antic rhythms of the human figures. […]

At such times one thinks: What is Happening? why are we here? what does this mean? can’t this be stopped? My terror at seeing Floyd Patterson battered into insensibility by Sonny Liston was not assuaged by my rational understanding that the event had taken place long ago and that, in fact, Patterson is in fine health at the present time, training an adopted son to box. […]  More justified, perhaps, was my sickened sense that boxing is, simply, wrong, a mistake, an outlaw activity for some reason under the protectorate of the law, when, a few weeks ago in March 1986, I sat in the midst of a suddenly very quiet closed-circuit television audience in a suburban Trenton hall watching bantamweight Richie Sandoval as he lay flat and unmoving on his back … very likely dead of a savage beating the referee had not, for some reason, stopped in time. My conviction was that anything was preferable to boxing, anything was preferable to seeing another minute of it, for instance standing outside in the parking lot for the remainder of the evening and staring at the stained asphalt …

A friend who is a sportswriter was horrified by the same fight. In a letter he spoke of his intermittent disgust for the sport he has been watching most of his life, and writing about for years: “It’s all a bit like bad love—putting up with the pain, waiting for the sequel to the last good moment. And like bad love, there comes the point of being worn out, when the reward of the good moment doesn’t seem worth all the trouble…”

Yet we don’t give up on boxing, it isn’t that easy. Perhaps it’s like having tasted blood. Or, more discretely put, love commingled with hate is more powerful than love. Or hate.

Morris, Daniel. “Figuring and disfiguring: Joyce Carol Oates on boxing and the paintings of George Bellows.” Mosaic: A Journal for the Interdisciplinary Study of Literature. 31.4 (1998): 135. Print.