The Poisoned Kiss and Other Stories from the Portuguese—Joyce Carol Oates’s numinous and unusual short story collection from 1975—has been considered an anomaly among her books, and something of a mystery. 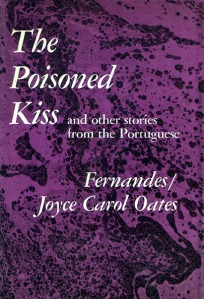 Adding to the mystery is JCO’s afterword to the book, where she explains:

In November of 1970, while I was occupied as usual with my own writing, I began to dream about and to sense, while awake, some other life, or vision, or personality ….

The Fernandes stories came out of nowhere: not out of an interest in Portugal (which I have never visited), or a desire to write parables to pierce through the density of existential life that I dramatize in my own writing. …

If I did not concentrate deliberately on my own work, or if I allowed myself to daydream or become overly exhausted, my mind would move—it would seem to swerve or leap—into “Portugal.” There seemed to be a great pressure, a series of visions, that demanded a formal, aesthetic form; I was besieged by Fernandes—story after story, some no more than sketches or paragraphs that tended to crowd out my own writing. …

The only way I could accept these stories was to think of them as a literary adventure, or a cerebral/Gothic commentary on my own writing, or as the expression of a part of my personality that had been stifled. …

Since this experience, I have been reading voluminously in parapsychology, mysticism, the occult and related subjects, but so far I have not been able to comprehend, to my own satisfaction, what really happened. … My fairly skeptical and existential attitude toward life was not broad enough to deal with the phenomenon I myself experienced, and yet, at the present time, I find it difficult to accept alternative “explanations.” …

Repeatedly, one is brought back to the paradox that one can experience the world only through the self—through the mind—but one cannot know, really, what the “self” is. …

Fernandes retreated when his story seemed to be complete. A kind of harmony or resolution must have been established, and the manuscript came to an end. Years later, writing this afterword, I am almost tempted to return to my earliest and most conventional diagnosis of the experience and claim it to be only “metaphorical”—the stories, the book they gradually evolved into, the afterword itself. But in truth none of it was metaphorical, any more than you and I are metaphorical.

This fascinating afterword may well explain the origin of the “Fernandes” stories, but it may also leave a wrong impression that the stories were somehow transcribed dreams rather than “written” stories—that they’re somehow less rational, constructed, writerly than JCO’s “regular” stories. JCO even seems to try to dispel this impression in a 1986 Writer’s Digest interview:

I should stress, though, that the voice of these tales was firmly joined to a fairly naturalistic setting by way of subsequent research and conversations with friends who knew Portugal well. And the tales were rigorously written and rewritten.

The afterword addressed the mystical/personality issues that were clearly of primary interest to JCO at the time, leaving out a sense of the more mundane mechanics of research, writing, and revision; and possibly leading the potential literary critic to look elsewhere for less impenetrably personal material to analyze.

However, a few critics have been undaunted. Some have briefly noted the influence of Borges on the one hand, and Portuguese poet Fernando Pessoa, on the other. James R. Giles takes the first serious look at the book—story by story—and finds a commentary on “the contrast between ‘minimal art’ and ‘sanctifying art,'” as well as thematic links to JCO’s other work. Eileen Bender also sees that “Oates/Fernandes offers a parable about the essence of fabulation …. This meta-fiction is an exposure of the deathliness of meta-fiction itself, the ultimate art of annihilation.” And Jacqueline Olson Padgett is concerned about  literary colonialism:  “Oates’s possessed authorship of a little bit of literature for Portugal forces us to face the danger of such work rendering Portugal’s literature anonymous, of inscribing it only in and by the look of an American other.”

But the most compelling and sustained analysis of The Poisoned Kiss is published this month. Susana Araújo, an appointed researcher at the Centre for Comparative Studies at the University of Lisbon, and JCO critic extraordinaire, manages to synthesize and greatly expand upon earlier critical insights, as well as correct some previous misjudgments in her article “Joyce Carol Oates’s transatlantic personae: Fernando Pessoa and Jorge Luis Borges in the USA“ for the March 2010 issue of Atlantic Studies. (contact your library for access to the full article).

This article explores Joyce Carol Oates’s allusions to the work of the Portuguese writer Fernando Pessoa in her collection of stories, The Poisoned Kiss and Other Stories from the Portuguese (1975). In these stories, Oates maps out an unacknowledged transatlantic genealogy: she re-reads the work of Fernando Pessoa in order to unveil the influence of the Portuguese modernist writer in the works of Jorge Luis Borges—a figure who was, in turn, a major influence for the metafictional writing produced in the US from the 1960s onwards. In order to understand the influence of Borges for the American Fabulators, Oates explores prevailing notions of subjectivity and writing which can be traced back to Pessoa. By travelling back and forwards between Portugal and the US, these stories allow us a better understanding of the US literary landscape during the 1960s and the 1970s in the light of decisive Atlantic lineage.

Araújo manages to set the context of these stories in JCO’s argument with American metafiction of the time, her ambivalent relation to Borges, and her intense engagement in this collection with Pessoa.

What is revealed is a much more intellectually complex and unified work than its haunted reputation would suggest—a lesson that could well be applied to all of JCO’s work.