Skip to content
The Corn Maiden and Other Nightmares
Books

The Corn Maiden and Other Nightmares

An incomparable master storyteller in all forms, in The Corn Maiden and Other Nightmares Joyce Carol Oates spins six imaginative tales of suspense.

“The Corn Maiden” is the gut-wrenching story of Marissa, a beautiful and sweet eleven-year-old girl with hair the color of corn silk. Taken by an older girl from her school who has told two friends in her thrall of the Indian legend of the Corn Maiden, in which a girl is sacrificed to ensure a good crop, Marissa is kept in a secluded basement and convinced that the world has ended. Marissa’s seemingly inevitable fate becomes ever more terrifying as the older girl relishes her power, giving the tale unbearable tension with a shocking conclusion. In “Helping Hands,” published here for the first time, a lonely woman meets a man in the unlikely clutter of a dingy charity shop and extends friendship. She has no idea what kinds of doors she may be opening. The powerful stories in this extraordinary collection further enhance Joyce Carol Oates’s standing as one of the world’s greatest writers of suspense. 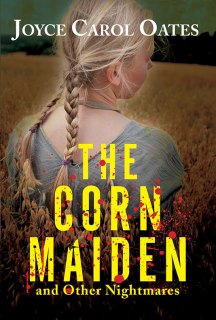 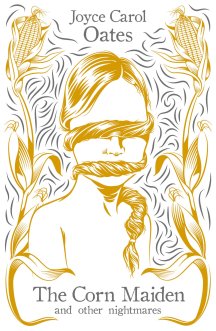 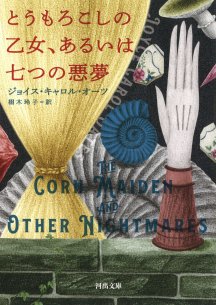 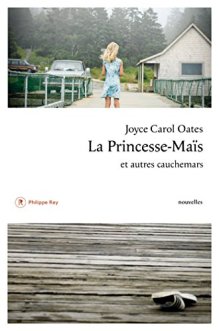 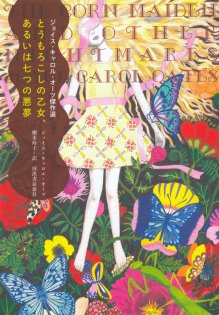 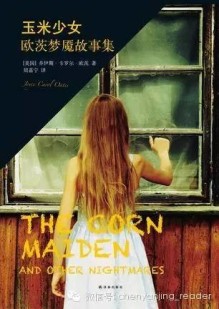 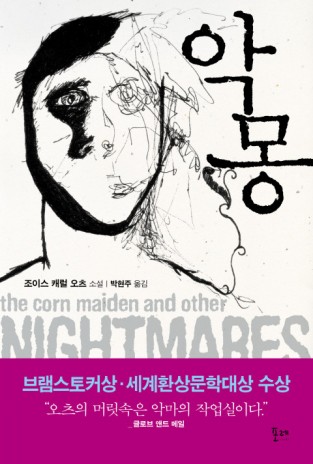 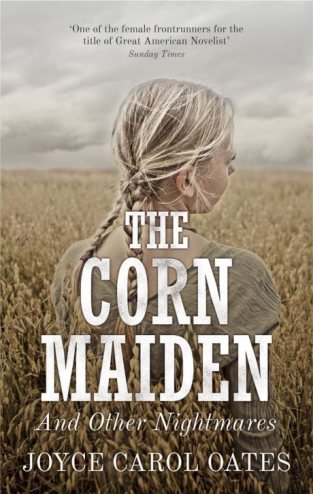 Why why you’re asking here’s why her hair.

I mean her hair! I mean like I saw it in the sun it’s pale silky gold like corn tassels and in the sun sparks might catch. And her eyes that smiled at me sort of nervous and hopeful like she could not know (but who could know?) what is Jude’s with. For I am Jude the Obscure, I am the Master of Eyes. I am not to be judged by crude eyes like yours, assholes.

There was her mother. I saw them together. I saw the mother stoop to kiss her. That arrow entered my heart. I thought I will make you see me. I would not forgive.

Okay then. More specific. Some kind of report you assholes will type. Maybe there’s a space for the medical examiner’s verdict cause of death.

Assholes don’t have a clue do you. If you did you’d know it is futile to type up reports as if such will grant you truth or even “facts.”

Whywhy in the night at my computer clickclickclicking through galaxies and there was revealed on my birthday (March 11) the Master of Eyes granting me my wish that is why. All that you wish will be made manifest in Time. If you are Master.

Jude the Obscure he named me. In cyberspace we were twinned.

In both ways: there is a necessary, inevitable end, and as you proceed toward it, you begin to half-consciously experiment with alternate endings, to determine if one might be superior to the original ending you’d devised. In this case, I knew how the ending would emerge — who the “sacrifice” would be. And I knew how the survivors would be drawn together into a new little family, very vulnerable but hopeful despite the traumatic memories that bind them.

This volume burnishes Oates’s reputation as a master of psychological dread.

While the shadows of Poe and Hitchcock loom over these tales, it’s clear that Oates herself is a master at creeping out her readers.

In each astute, creepy, nearly paralyzing tale of longing, malevolence, and calamity, Oates extends her tireless exploration deep into the darkness of damaged and criminal psyches, a realm of terrible power.

Psychologically compelling and disturbing, this volume is a strong addition to Oates’s vast body of work.

Oates’ gift for characterization is so profound, her protagonists so believably rendered, the reader is made to wonder whether the author herself has changed gender, class, age, and life experience to better breathe life into them.

Even within the wild and tangled menagerie that comprises our literary landscape, Joyce Carol Oates is a startling creature, possessed of a speed and talent that hints at the uncanny. She often appears to exist in several places at once, fantastic acts of genre-shifting accomplished without smoke or mirrors. In her new collection, Oates may be interested in renovations more than innovations, but readers will find plenty of ambiguity and strangeness to celebrate.

For horror stories to be truly horrific, the reader has to care. Oates feels this deeply in her writing, and delivers with style.

The irrational power of our subconscious narratives is what lends Oates’s horror stories such power, idiosyncrasy and strangeness. It is also, in some cases, what detracts from their full realizations as structured narratives. As with our own everyday nightmares, Oates’s stories too often don’t resolve but simply end, as though from the ringing of a bedside clock. Some of the pieces in The Corn Maiden are so genuinely frightening, however, this may not strike the reader as a shortcoming but a relief.