Skip to content
Jack of Spades: A Tale of Suspense
Books

Jack of Spades: A Tale of Suspense

From one of the most highly regarded writers working today, Jack of Spades is an exquisite, psychologically complex thriller about the opposing forces within the mind of one ambitious writer, and the delicate line between genius and madness.

From one of the most highly regarded writers working today, Jack of Spades is an exquisite, psychologically complex thriller about the opposing forces within the mind of one ambitious writer, and the delicate line between genius and madness.

Andrew J. Rush has achieved the kind of critical and commercial success most authors only dream about: he has a top agent and publisher in New York, and his twenty-eight mystery novels have sold millions of copies around the world. He also has a loving wife and three grown children and is highly respected as a philanthropist in his small New Jersey town. Only Stephen King, one of the few mystery writers whose fame exceeds his own, is capable of inspiring a twinge of envy in Rush.

But unbeknownst to anyone, even in his own family, Rush is hiding a dark secret. Under the pseudonym “Jack of Spades,” he pens another string of novels—dark potboilers that are violent, lurid, even masochistic. These are novels that the refined, upstanding Andrew Rush wouldn’t be caught reading, let alone writing. When his daughter comes across a Jack of Spades novel he has carelessly left out, she insists on reading it and begins to ask questions. Meanwhile, Rush receives a court summons in the mail explaining that a local woman has accused him of plagiarizing her own self-published fiction. Before long, Rush’s reputation, career, and family life all come under threat—and in his mind he begins to hear the taunting voice of Jack of Spades.

Tunneling into the most fraught corners of an immensely creative mind, Jack of Spades is a startling, fascinating novel by a masterly writer.

Out of the air, the ax. Somehow there was an ax and it rose and fell in a wild swath aimed at my head even as I tried to rise from my squatting position and lost my balance desperate to escape as my legs faltered beneath me and there came a hoarse pleading voice—“No! No please! No”—(was this my own choked voice, unrecognizable?)—as the ax-blade crashed and sank into the splintering desk beside my head missing my head by inches; by which time I’d fallen heavily onto the floor, a hard unyielding floor beneath the frayed Oriental carpet. I was scrambling to right myself, grabbing for the ax, desperate to seize the ax, in the blindness of desperation my hands flailing, and the voice (my own? my assailant’s?) high-pitched and hardly human-sounding—“ No! Nooo”—a fleeting glimpse of the assailant’s stubby fingers and dead-white ropey-muscled arms inside the flimsy sleeves of nightwear, and a grunting cry as of triumph and fury commingled; and again the terrible lifting of the ax-head, the dull sheen of the crude ax-blade, and the downward swing of Death once begun unstoppable. 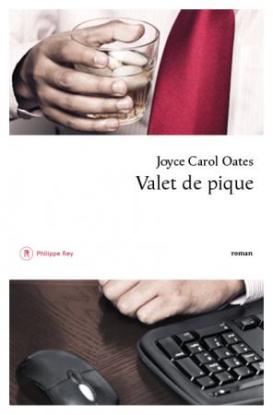 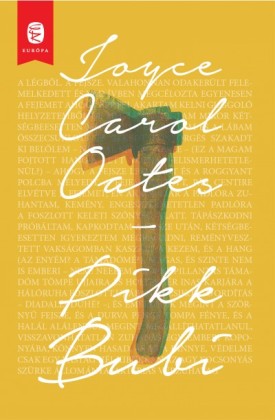 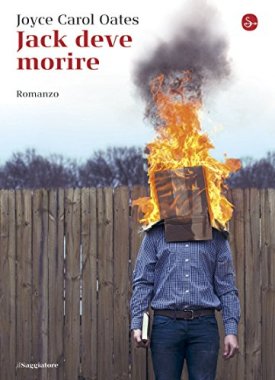 Oates has written a great psychological noir novel, which also serves as a homage to Stephen King … As this tour de force reveals, Oates is a master of bleak literary fiction and its (sometimes) poor relation, crime/noir fiction. Examining and delineating insanity, obsession, paranoia, alcoholism, manipulation, and murder, not to mention book collecting and writer’s block, this tale of suspense makes for another high-caliber Oatesian outing, displaying flair, noir sophistication, and Kinglike flourishes.

Oates has found a marvelous modern parallel to Poe’s tales of neurotic narrators struggling to project the appearance of sanity even as they are being overwhelmed by the emotions undoing them. Her novel is a thrilling excursion into the literary macabre that persuades us to buy into the story Andrew J. Rush has crafted about himself, then pulls the rug out from under us – just as Jack of Spades would do.

Jack of Spades is a fast-paced read filled with high drama and the expertly-rendered delineation of a writer’s descent into madness. Oates has a compelling way of exploring the disaster and derangement that can ensue if darker subterranean aspects of consciousness are allowed free reign. This is a playful novel which works as a psychological thriller as well as a critique of the genre and the publishing industry which produces it. It’s also a brilliantly enjoyable tribute to the greatest writers of this popular form of the novel.

Just when you think you’ve got her all figured out, Joyce Carol Oates sneaks up from behind and confounds you yet again. She does it with a wicked flourish in JACK OF SPADES…

Poe’s classic tales—especially “The Black Cat” and “William Wilson”—the story’s modern spin is entirely of her own clever invention. Readers are sure to be gripped and unsettled by her depiction of a seemingly mild-mannered character whose psychopathology simmers frighteningly close to the surface.

With its homages to Poe, from “The Black Cat” to “The Tell-Tale Heart,” and the horror masters Jack of Spades so admires, this latest unsettling and chilling thriller from Oates does not disappoint.

Oates is smooth — so smooth that readers barely notice how she tightens her silken noose of a plot around their throats.

With its homages to Poe, from “The Black Cat” to “The Tell-Tale Heart,” and the horror masters Jack of Spades so admires, this latest unsettling and chilling thriller from Oates does not disappoint.